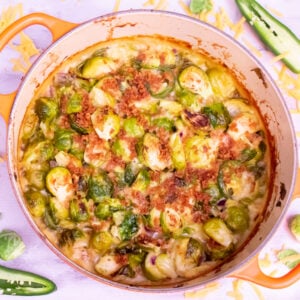 Spicy food lovers, you are going to love this spin on traditional au gratin potatoes. This Brussels sprouts recipe smothers seared sprouts in a spicy cheese sauce with a crunchy panko crumb topping.

Preheat the oven to 425 degrees F. I suggest using a shallow oven safe dish such as a dutch oven.

Melt 1 tablespoon of butter over a medium low heat. Add in the 1 pound of trimmed and sliced Brussels sprouts, and sauté until bright and seared. About 5 minutes.

Add 1 tablespoon flour and mix until all of the shallots, jalapenos, and garlic are covered.

Add the ½ cup vegetable broth, ½ cup milk, and ½ cup cream. You can use whipping cream or half and half.

Bring the mixture to a low simmer, careful not to boil, and cook until liquid begins to thicken. Cook for about 2 minutes. Turn off heat.

In small batches, add in ½ cup gruyere and ¼ cup cheddar. Fully mix in the cheese before adding more. Repeat until all of the cheese is added and incorporated.

Melt the remaining 1 tablespoon of butter. Mix the melted butter with ¼ cup panko breadcrumbs and some of each cheese.

Top the cheesy Brussels sprouts with the breadcrumb mixture. Transfer the dish to the oven and bake at 425 for about 20 minutes, until the sauce is bubbly and the breadcrumbs are golden.

Broil on low for a few minutes for toastier breadcrumbs. 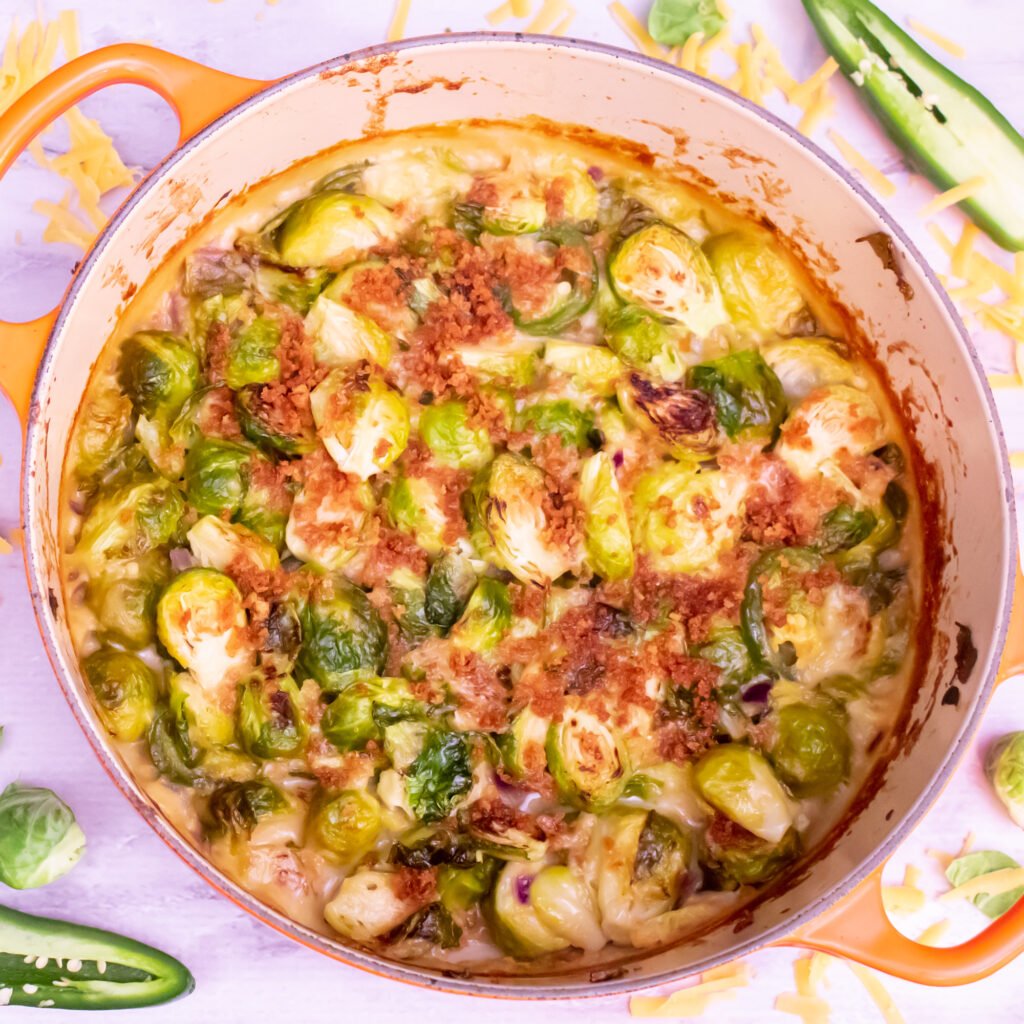 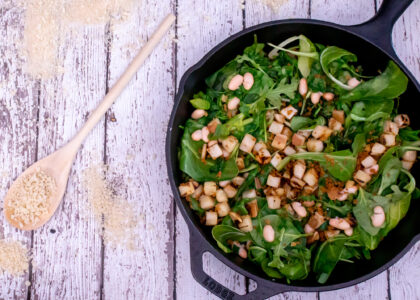 A side dish version of Italian greens and beans (scarola e fagioli) that’s packed with nutrient-rich kale and chard, and turnips – a vitamin C powerhouse! Plus how to store greens for weeks.

Melt 1 tablespoon of butter in a large saute pan. Add the ¼ cup of panko breadcrumbs and saute over a medium low heat until golden brown and crispy. About 2 minutes.

Remove breadcrumbs from the pan and set aside.

Melt the remaining butter in the saute pan and add the 1 diced turnip. Saute at medium until fork tender. About 10 minutes.

Add in the 8 cups of braising greens and cook them til they just begin to wilt. About 2 minutes. Add in 1 can of cannellini beans and saute for another minute.

How to Store Greens: Line a large airtight container with paper towels and add the greens. Stored in the fridge this way, they can keep fresh for weeks.

Top off with the toasted breadcrumbs and Parmesan cheese.

Salt and pepper to taste. Enjoy! 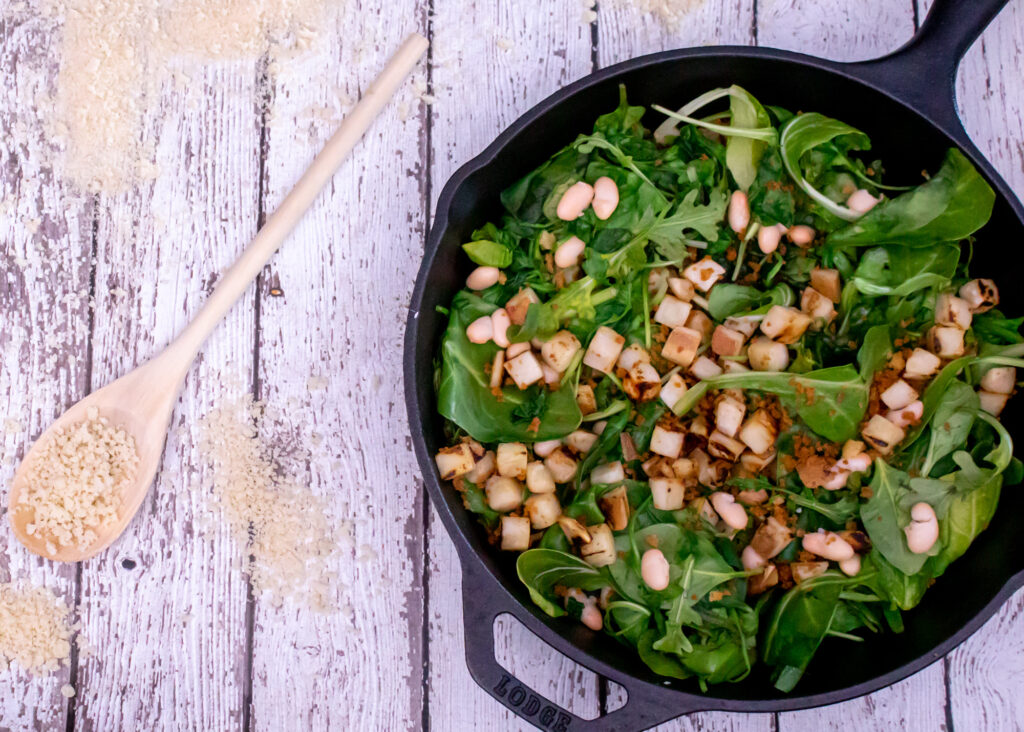 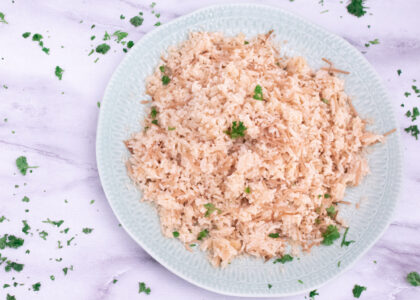 My mom’s homemade rice pilaf is buttery and comforting. This recipe is a family staple, easy to make, and made by many friends of the family.

Melt ¼ cup butter over a medium low heat in a medium saucepan.

Add 1 cup egg noodles and cook until browned, about 10 minutes.

Add the 1 cup rice and add in the 3 cups vegetable broth and stir ingredients to mix.

Cover. Turn the heat to medium high and bring broth to a boil. About 3 minutes.

Reduce to a simmer, and cook about 20 minutes until water has all been absorbed.

Fluff with a fork and serve. Enjoy! 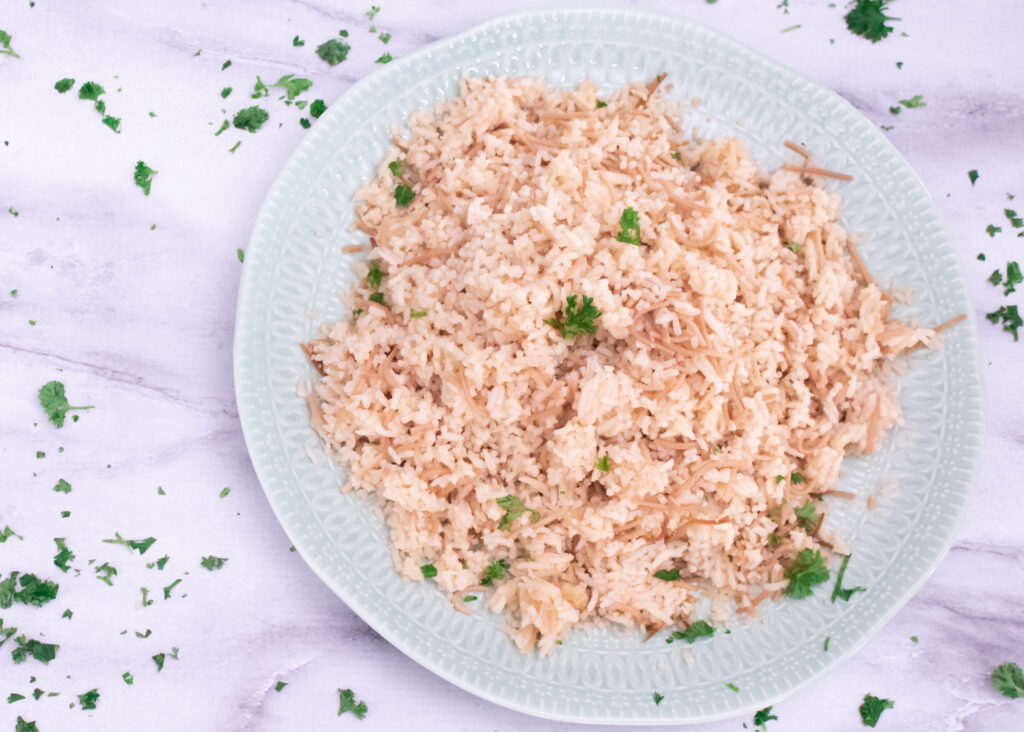 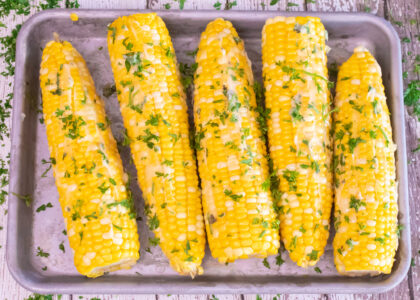 A spicy and sweet corn recipe with homemade honey butter infused with hot honey, garlic, and fresh herbs. Plus how to cook corn on the cob perfectly every time and food storage tips.

Add 1 stick of butter, 2 cloves of garlic, ½ teaspoon minced oregano, 1 tablespoon minced parsley, and 2 tablespoons of hot honey to a mixing bowl. Mix until all of the ingredients are thoroughly combined. Check out my food hack for cooking with fresh herbs .

How to store garlic: a bulb of garlic, once the seal on the bulb has been broken, it is best to use that garlic up quickly. It will only keep fresh for about a week. You can make the garlic last for months by storing it in vinegar in the refrigerator. Never oil!

How to store fresh herbs: for leftover oregano and parsley, store it like cut flowers. Trim the stems and place them in a few inches of water in the fridge. Change the water as needed.

Transfer the mixture to a small bowl or ramekin, cover, and refrigerate for about an hour, until spread just firms up.

How to store corn: Buy the freshest corn you can. As soon as corn is picked, the kernels dry out and get tough and the sugars convert to starch. Corn contains proteins called prolamins, whose bitterness becomes more pronounced as the sugar concentration declines. Refrigeration helps slow this down but I wouldn’t keep corn longer than three days in the fridge.

The easiest way to husk corn (or shuck corn) is to trim off the stem-side of the corn at the girthiest spot. Microwave the corn for about 30 seconds, more if doing more than one at a time. Then carefully squeezing the ear from the other side, the corn will slide right out from the silk and husk. Here’s my video on how to husk corn for more details.

For tender and juicy corn, cook it in a hack sous vide method. Bring at least 4 quarts of water to a boil. Do not add salt as it makes the kernels tough. You can add a little sugar to sweeten up ears of corn that aren’t as fresh. It will mask any developed bitterness.

Add the 2 jalapenos to the boiling water. Add the 6 ears of corn.

Turn off the heat, cover the pot, and let stand for at least 10 minutes to cook and up to 30 minutes. Remove corn.

Spread the hot honey & garlic butter over each ear of corn. Top off with any remaining chopped parsley. Eat immediately. 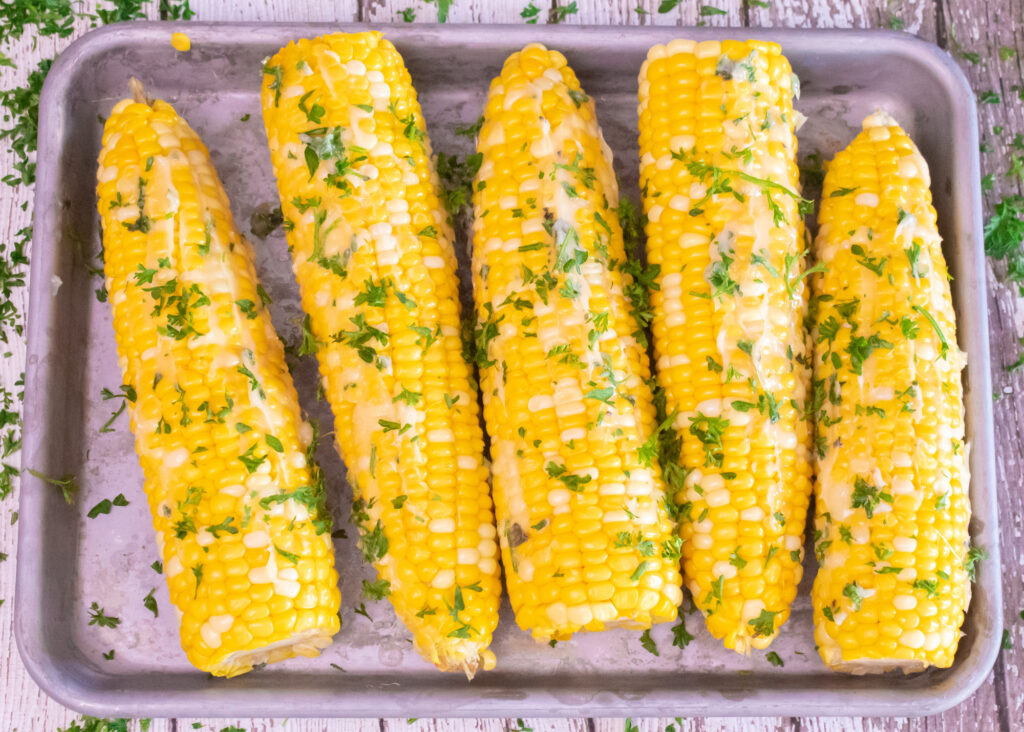 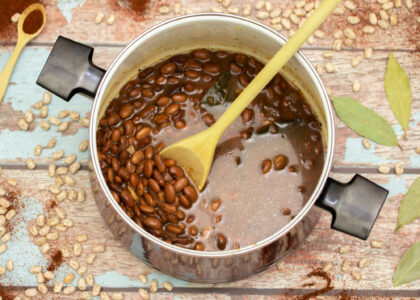 Delicious vegetarian pinto beans that are slow-cooked to perfection. This crockpot recipe not only makes great beans, it also makes a great broth for soups and more.

Check the beans for any bad ones and remove them. Rinse remaining beans.

Add all ingredients to the crockpot.

Cook on medium high for 8 hours, until beans are tender.

To store the beans, place them in an airtight container in the fridge. You can freeze them for up to 6 months.

These beans are great as a side to any Mexican dish but make great tacos, nachos, and burritos too. 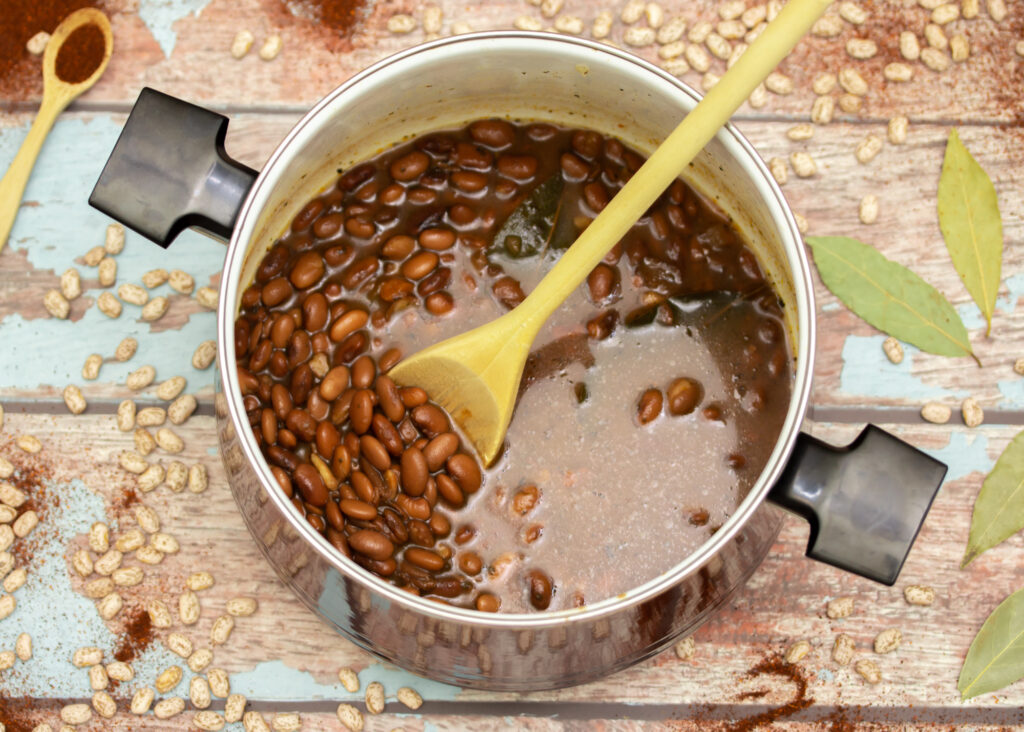 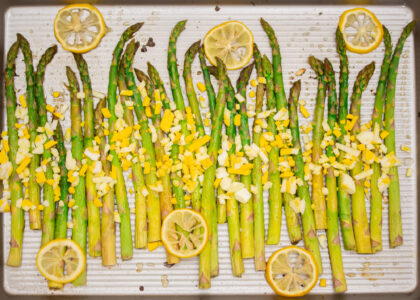 Here’s a great vegetarian side dish of lemon-roasted asparagus with crumbled hard-boiled egg over the top. Plus food storage tips for asparagus and how to tell if your eggs are fresh or not.

Preheat the oven to 425 degrees F.

Trim off the very ends of the asparagus. Watch my video here on how to cut asparagus to learn more about that.

Lay the asparagus out on a half-size baking sheet or a sheet large enough where they lay in an even layer.

Drizzle with the olive oil and, using your hand, roll the asparagus back and forth to fully coat. Sprinkle it with salt and pepper. Squeeze fresh lemon juice over the asparagus and top off with sliced lemons.

Dice the hard-boiled eggs with an egg slicer. Slice one way, rotate the egg 45 degrees, and slice again.

Once roasted, transfer the asparagus to a serving plate. Add more salt, pepper, and lemon juice if desired.

Top with the diced egg and serve. Enjoy! 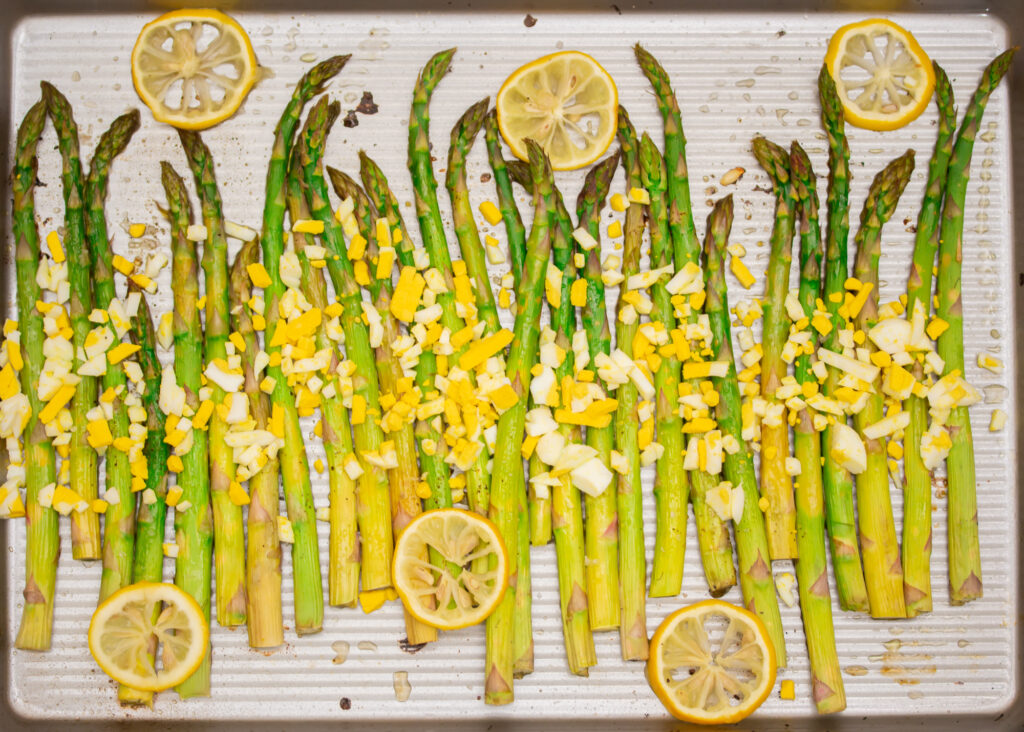 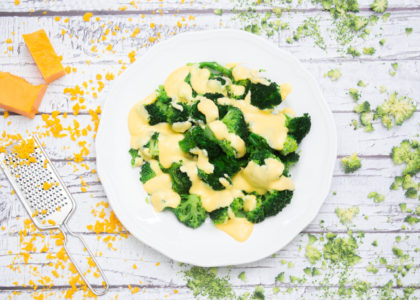 This is a great side dish for getting more broccoli into your diet. The homemade cheese sauce is easy to make and great not just on broccoli, but cauliflower, nachos, or baked potatoes.

Create a roux by warming and melting the two tablespoons of butter in a large skillet and adding one tablespoon of flour. Whisk well until all of the flour is incorporated. If you like your sauce on the thicker side, use 2 tablespoons of flour.

Slowly add in 1 cup of milk. While whisking to combine, bring the mixture to a low simmer over a medium heat. Do not boil. Once it is simmering, cook for 2 minutes.

Why the mixture is coming up to a simmer, bring a sauce pot filled with water to a boil. Add the sea salt, minus a pinch or two.

Add the broccoli and cook for 1 minute, just until it turns a brighter green. It will be on the crunchy side, cook for 2 minutes longer for a more tender broccoli.

Once the broccoli is cooked as desired, transfer it to an ice bath to stop the cooking. Let rest for a few minutes but do not chill the broccoli for too long. You just want to stop it from cooking.

After the milk mixture has cooked for 2 minutes, remove from heat. Add in the cheddar cheese, ¼ cup at a time, stir until fully melted and incorporated, then repeat. Do until all cheese is mixed in. Do not do this step over any heat as the sauce can break.

Salt the sauce with the pinch of salt if needed.

Pour the sauce over the broccoli and serve. Enjoy! 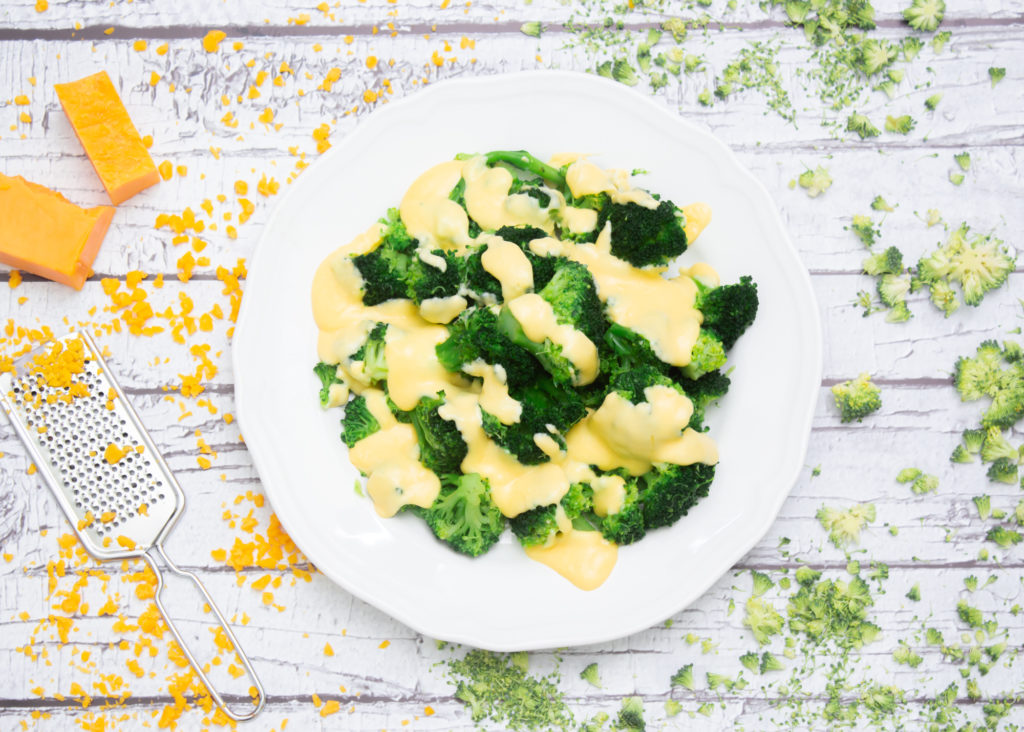 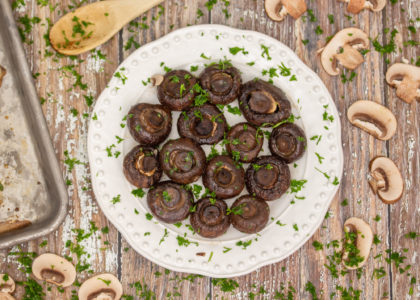 In a mixing bowl, toss the mushrooms with olive oil, salt, and pepper.

Place the mushrooms on a quarter-sized baking sheet (13 X 9.5 inches) and spread them out in an even layer.

Roast the mushrooms in the oven for 20 minutes, stirring on occasion. If the shrooms release a lot of liquid and it isn’t burning off, drain off the liquid from the tray and return them to the oven. Roast until nicely browned and your house smells amazing.

Finish the roasted mushrooms off with chopped parsley and serve. 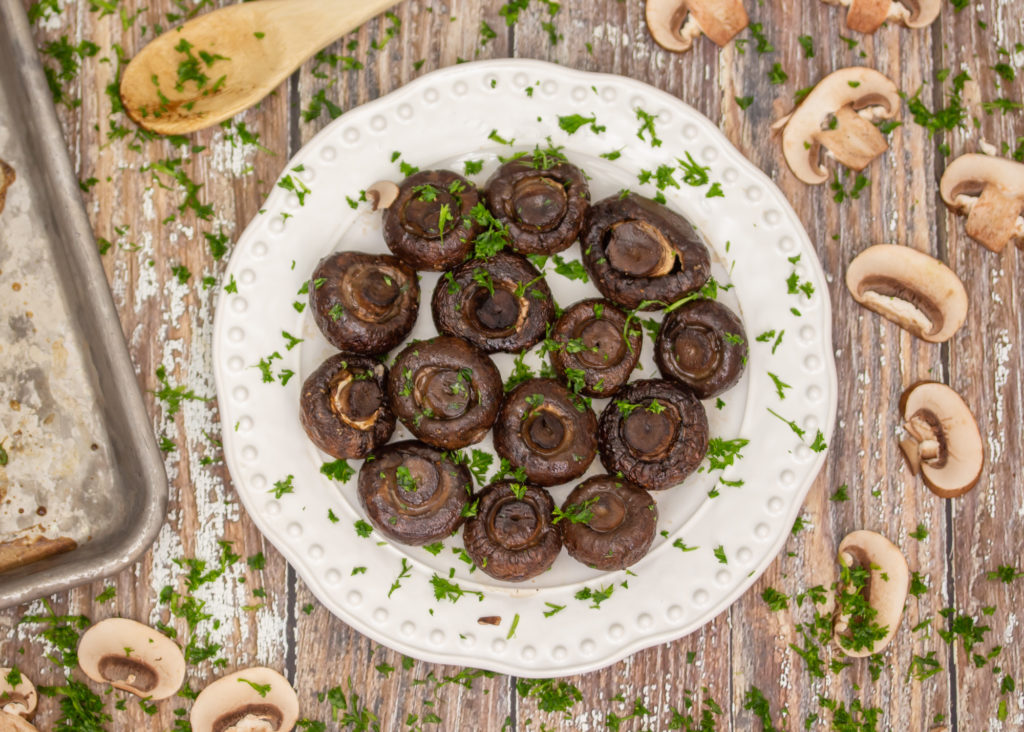 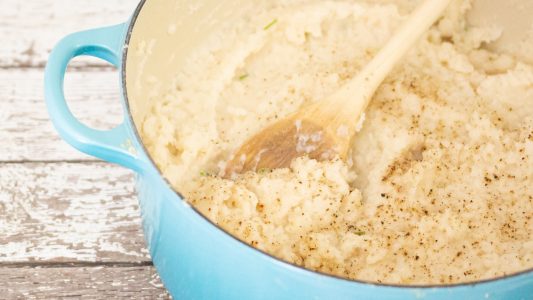 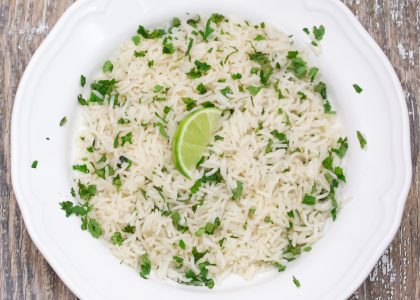